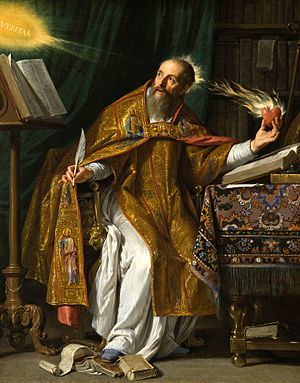 “Lord, help me to be pure–but not just yet. ”  St. Augustine

(before sainthood, no doubt)

If the Steps were puppies, Step 6 would undoubtedly be the runt of the litter.

The book Alcoholics Anonymous (the Big Book) glosses over it in one paragraph of 66 words, and 13 of those are lead-in.  If you blink while reading, you might miss it all together.  The gist of the instruction is to ask ourselves if we are ready; if the answer is no, we ask God for help.  That’s it.  Not much to work with even for those who believe in an interventionist deity, less for those of us who don’t.

“Were entirely ready to have God remove all these defects of character.”  I mean, come on already, it’s not even a step!  Or is it?  When someone in the fellowship relapses, Steps 4 and 5 are the usual suspects, and the person is advised “You need to do Steps 4 and 5 again to find what you left out.”  I submit that more relapses occur due to a misunderstanding of Step 6 than any other single step.

I had identified many (not all) of my defects in Steps 4 and 5.  Early in the process, I thought that having done that I’d have no reason not to let them go.  I was desperate and serious about the program.  Why would I not want to get rid of all my baggage?  It turned out to be not so black and white as that.  Many of my defects had been with me for so long, had become so much a part of who I believed I was, that I couldn’t see myself without them.  How would I be able to function at work, at home, at all, without this or that ‘defect’, who would I be, were the questions, fears really, that were running around in my head.

It helped when I read (in the book Twelve Steps and Twelve Traditions) that these defects we’ve been talking about are actually natural instincts either misdirected or gone wild–“exceeded their proper function” as Bill W. wrote.  Since they’re natural instincts, they cannot be completely removed.  Pride gone wild can run from arrogance to narcissism; yet properly positioned, it is self-esteem.  Fear and anger are necessary survival instincts, but when they are operating at inappropriate times, in the wrong situations, or left unchecked to swell out of proportion to the time and circumstance, they overpower our ability to take the appropriate actions for our survival.

Bill W. goes on to explain that while the obsession to drink seemed to be removed by a higher power for the early members of AA, that wasn’t the case with these character defects, and he suggests this is because, while they cause us problems, they do not cause us “excessive misery.”  I would add also that the cause/effect is not as obvious as it was (is) with our drinking.

I know now that my defects lose their power over my actions not through denial or divine intervention, but through my:

When the defects lose their power over areas of my life where they have no place, they are effectively ‘removed.’

This is a lifetime effort for me.  I still have issues, but as they present themselves I do what I can to deal with them.  From my personal experience, and from hearing others share their experience with this Step, it is probably universal that our defects come into our awareness one at a time for attention and removal.  Even the Bible points to the fact that one’s defects are not instantly and permanently removed by God; there are things one has to do and keep on doing.  As my defects come to my awareness, I look inside myself to see their exact nature and what benefit I may still be getting by keeping them, such as comfort and security, ego strokes, a perverse pleasure even.  When I can do that, then I can begin to let them go, and replace them with compassion and loving-kindness toward myself and others.

“One way or another, we all have to find what best fosters the flowering of our humanity in this contemporary life, and dedicate ourselves to that.”   Joseph Campbell

What has your experience been with Step 6?  Let us know by leaving a comment!