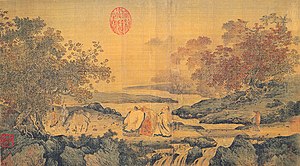 At the time I began the Steps, I had long since forsaken the religion of my youth. For a few years I had made science my religion, but found no more answers there than I had in the church.  Humanism and nature-worship didn’t help, either.  I had turned to Buddhism and Taoist philosophy and was moving closer to what I imagined I was looking for when my obsessive/compulsive relationship with alcohol took off, and further spiritual growth all but stopped.

So I had little trouble with the spiritual dimension of the program.  But the Steps seem to require belief in, if not the Judeo-Christian concept of God, at least an interventionist higher power, one that is aware of our suffering and willing and able to help.  This was a major problem for me.

And the advice I received in the rooms when I voiced my lack of belief in an interventionist deity only compounded my dilemma.  That advice boiled down to one of two suggestions: 1) that I “act as if” such a deity existed, or 2) that I “fake it ’til I make it.”  Concerning the first, I never could figure out exactly what “acting as if” meant, and any explanation I received always sounded disturbingly like “fake it ’til you make it.”

“Fake it ’til you make it” is more than just a rewording of ‘act as if,’ though.  In a program where “absolute honesty” is a core ideal and “rigorous” honesty a basic requirement, the notion of faking any part of it is ludicrous.  The Steps work, in large measure, by allowing us to find our true selves and be comfortable living according to our real values, without the masks and role-playing we’ve gotten ourselves lost in.

Then, in one of those serendipitous events that seem to occur with ever-increasing frequency to those involved with the Steps, I picked up a book of essays by Aldous Huxley titled Huxley and God, Essays on Religious Experience.  In the first essay, Huxley wrote about the need for a “minimum working hypothesis” in the context of “researching…purely spiritual experience.”  This was an ah-ha! moment for me.  Where I couldn’t (or wouldn’t) act as if I believed, and abhorred the idea of faking belief, I could certainly ‘test the hypothesis’ that there might be some sort of interventionist higher power out there.

Semantics?  Probably, but very important to my success with the Steps.  From that point on, I was ‘testing the hypothesis’ in everything I did, without needing to be an actor playing a role or faking anything for my own or another’s benefit.  It was an approach that was rigorously honest and all I required to make my beginning.

I still had a long, convoluted and tortuous journey going through the Steps, and today, I still do not believe in an interventionist higher power.  The main results of the ‘experiment’ are that I am recovered from the seemingly hopeless condition of alcoholism, and I have returned to following Taoist and Buddhist practices for continued spiritual growth with inconceivably positive results.

In the long run, we get exactly what we ask for.  (Aldous Huxley in “The Minimum Working Hypothesis.”)

Thanks for being here!  Any and all comments are welcome.